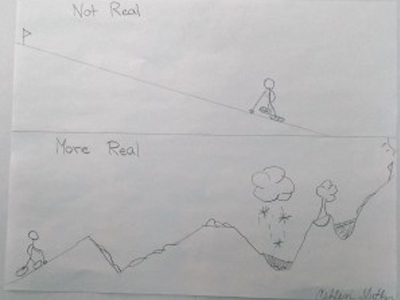 If you are saving for retirement, this recent bout of volatility presents opportunity.  Some of the greatest rewards often follow times of significant turmoil in the market.  If you are retired (or close to it), you should have had a strategy in place to deal with the potential curve balls the markets can toss.  If you fall into the latter group, it is my belief that you would never be fully invested in stocks or equities – a strategy that needs to be identified at least 5 years before you retire.  You know the saying; don’t put all your eggs in…..

Markets are cyclical and governments are un-predictable – neither one can be controlled.  What we can control is our own actions.  Like when you are looking at your statement during down turns (what we are currently experiencing), what you see are not losses.  No, really, they’re not.  Simply put, you are seeing a decline (much different than a loss).  Your actions to sell would turn those declines into permanent losses.  They aren’t real until you make them real.  Decisions to buy or sell need to be knowledge-based and in the context of your situation.

As humans, we tend to put more emphasis on what is currently happening often resulting in losing sight of a likely long term outcome.  Your decisions, perhaps based upon emotions such as fear or greed, will affect your portfolio far more than the market will.

Attempting to ‘time’ when these periods of volatility will begin or end is a futile task and missing some of the best days (as shown in our last post) can have a huge affect on your rate of return.  The world’s greatest investor (that Warren Buffett guy!) doesn’t attempt to time the market and I’m thinking he’s a pretty smart dude! As he says,

Tolerating the ‘un-nerving’ times in the market is how we get rewarded.  History shows us that the good years have outweighed the bad (over 70% of time since 1825): Add it up: The good years won

As for curve balls, the market will always find some.  This year it’s China and Oil and it’s only February!  Next year, who knows – maybe Spain and skittles?  Your guess is as good as mine.  Guesses, predictions and (the word the finance industry is famous for) forecasts, are just that – guesses, predictions and forecasts.  Ignore the noise, buy quality as cheap as possible, be diversified and be patient.

I’ve been at this for almost 20 years and gone through some nasty times…the Asian Financial Crisis of 1997, Dot-Com bubble of 2000, 9/11, Financial Crisis of 2008 and the Flash crash of 2010 (plus some other blips along the way but you get my drift!)  Our recommendations have never placed an emphasis on what will happen tomorrow, next week, next month or even this year…they are designed to work for many years.  I understand the ups and downs that come with investing and know this, we are damn serious about the role we play in your life.

So, if it’s not all about the market what’s the key?  A combination of knowledge-based planning and discipline….period.

On a personal note, my daughter and I were talking about money and life and she looked at me and said, “you can’t just go straight up, you have to get some bumps and bruises along the way.”  It’s awesome to have my 10 year old keep me grounded! Thanks Ash, love you!

I think she drew it up pretty good…click on the pic below to see. 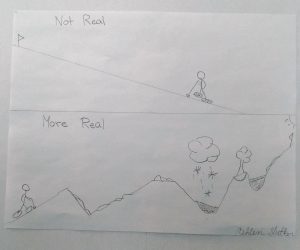